Whoosh in Front of the Camera 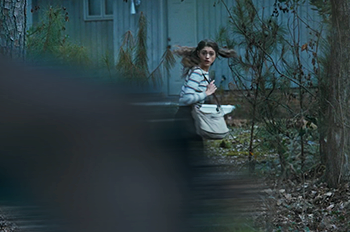 When something runs through the foreground, between the camera and the characters, usually behind their backs. Usually happens in wilderness settings, as the thing in question is moving through the overgrowth. Typically accompanied by a "whoosh" noise or a Scare Chord, with a Motion Blur for the fast moving object.
Advertisement:

This is a suspense-developing trope. The main character(s) are centered in the frame, going about their business, when something moves quickly through their periphery. It can go undetected, especially at first, but usually leads to a "Did you see/hear that?" sense of unease. If there's more than one of these foreground incursions, this'd be a sign that our Heroes are being furtively encircled by wolves or ninjas or mooks, something like that. Often presages a trap being sprung and our Heroes getting captured or raided. If the heroes react in time, it'll result in a "circle the wagons" kind of defense. Possibly qualifies as a Setting Trope, in that this'd be an indicator of hostile territory.

Usually happens after a Off Like a Shot in a Played for Laughs scenario. In some visual media like comic books/strips or animations, it should be accompanied by a Written Sound Effect with the "Whoosh" on it. Also seen in Videogame Dashing.

Not to be confused with the Woosh!

◊ meme; with Fight Woosh, which is an interruption in a video game usually when it comes a Boss Battle; with the board game of the same name

, or with Speed Blitz and Flash Step, which are specific speed abilities that characters can pull off either for comedic effect or to gain an advantage over their competition.

To warn the player that the Nut Alarm is active, it whooshes by the camera in a cutscene.

To warn the player that the Nut Alarm is active, it whooshes by the camera in a cutscene.