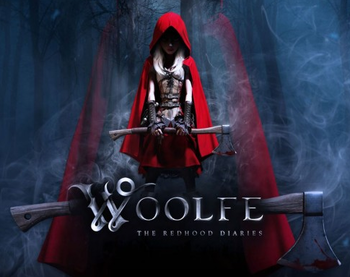 My name is Red Riding Hood. I have no father, no mother, no fear.

Woolfe - The Red Hood Diaries is a 3D Action-Adventure game by GriN. It was funded

The story begins on the day Red Riding Hood returns to the city of Ulrica.

Four years ago today, Red's father, Joseph, died in a work accident. At least, that's the official story. The case was closed, and lips were sealed. Red, however, never bought it for a moment. She suspects foul play. Specifically, she suspects B. B. Woolfe, the CEO of Woolfe Industries, which her father worked for. Armed with an axe, she sets out to uncover the truth, and this pursuit occupies volume one of the tale.

While volume 2 was planned, and set up by the ending, GriN went bankrupt by August 2015 after 13 years in business, due to the poor sales

of the first volume. By October 2015, the IP was purchased

by Rebellion (best known for the Sniper Elite series), but so far, their involvement had been limited to delivering the Kickstarter rewards GriN failed to deliver on, there is no word of a Volume 2, or some continuation, as of 2019.

Contrast with The Path and The Dark Side of Red Riding Hood, which also amount to a Darker and Edgier take on the same fairy tale, but amount to gameplay-light, narrative-focused experiences instead.