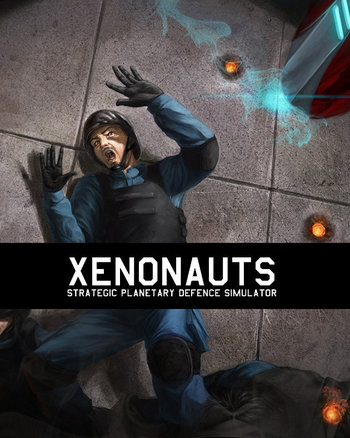 First Contact rule #1: Don't get too attached to your soldiers.
Advertisement:

In 1958, Earth made first contact. A UFO was spotted heading for the U.S. Ruled out as an ICBM due to its suddenly changing course for Iceland, it proved deadly to conventional aircraft and was grounded but not destroyed with the Nuclear Option. A joint NATO and Soviet force moved on the crash site, but took bitter losses and failed to recover anything of worth. In the wake of the Iceland Incident, the Xenonauts were clandestinely formed through West-Soviet collaboration. As time passed and further alien contact failed to materialise, however, funding and manpower was cut, stripping the organisation to the bone.

1979. An alien fleet arrives in Earth orbit, refusing communication and resisting almost all attempts to repel them. The sole success: A mysterious interceptor taking down a scout craft.

The Xenonauts step forward and claim responsibility, asking the world's governments for funding and permission to operate in their territories against extraterrestrial forces...

Xenonauts is a Turn-Based Tactics game where you command the eponymous organisation, sending interceptors and strike teams out to fight the alien menace while researching their technology in an attempt to become strong enough to take the fight to them. It is a Spiritual Successor to the original X Com UFO Defense, by indie developer Goldhawk Interactive, taking the basic flow of gameplay (strategic layer and tactical layer) and adding new innovations, such as the ability to use cover, fully controllable air combat, while also setting up an entirely new aesthetic by setting the game in the height of the Cold War. Its homepage can be found here

and was up for preorder; preorderers got to test the game as it underwent development. A Kickstarter campaign to raise money to add new features finished on June 10, 2012

, a semi-officialas in the mod-makers have been given direct access to the source code by Goldhawk mod that enhances certain features without fundamentally changing gameplay.

Goldhawk have stated that there are better than even chances of a sequel happening.

It is not a direct sequel to the first game but an Alternate Universe, set in an Alternate History present day where decades of alien interference have prevented the end of the Cold War. Following an alien attack on CENTRAL, the surviving Xenonauts have relocated to the backup site ATLAS Base, where they must fight in the air, on the ground and with Field Agents hidden within the Earth's nations to resist the aliens and complete ENDGAME before the aliens can trick the superpowers into global thermonuclear war. Among the changes will be shifting to 3D and air combat becoming turn-based.