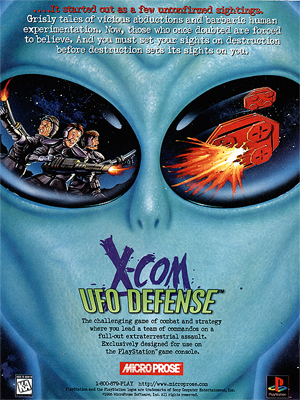 Okay! So you shoot down the UFO and then land and take out the surviving aliens. I think I got thi— HOLY CRAP!!!!
Advertisement:

X-COM: UFO Defense (known as UFO: Enemy Unknown if you're in Europe) is the first in the X-COM series of Turn-Based Tactics games.

The year is 1998. Strange things are afoot in our solar system. UFO sightings, previously dismissed as an urban legend, have become commonplace in the night sky. Reports of abductions and cattle mutilation spread terror throughout the population. At first, the global powers attempt to deal with this threat independently. However, after 5 fruitless months of trying to capture an alien craft, a deal is struck to merge these agencies into a global defense force: EXtraterrestrial COMbat Unit. On January 1, 1999, the U.N. council in Geneva rubber-stamps funding for the first X-COM base, with the proviso that future appropriations will be cut if the council doesn't see results—and soon. Meanwhile, members of the ruling body, skeptical of X-COM's ability to fend off the invaders, are secretly putting out feelers for peace...

It all started with Laser Squad, the first turn-based tactics game by Julian Gollop. X-COM was going to be Laser Squad 2 until Microprose suggested that an alien invasion scenario would be more exciting. The box art for the Firaxis remake, XCOM: Enemy Unknown, was designed in such a way to pay homage

to the series' roots.

The original X-COM had a (barely) two-year development time, an AI programmed with a few Kb, and was designed to run on an 80386 PC. (To this day, Gollop is not sure how they did it.) The aliens progress according to their own agenda, constantly threatening funding, introducing new types of missions and ultimately building bases. The AI is designed to make the player uncertain of what's around the next corner. Worse, the game does not set any victory goals or narrative at the start. By contrast, the aliens have clearly-stated goals: destroy all X-COM bases, bankrupt X-COM, or make a number of countries leave the X-COM project. Thus, at the beginning of the game the player is fighting a losing war. It's only at the depths of the research tree that the player discovers the tools needed to turn the tide and achieve victory.

X-COM spawned a number of mods and remake attempts, such as UFO: Alien Invasion and UFO: Extraterrestrials,

both of which are exact copies of the original. Another, Rebelstar: Tactical Command, came out on the Game Boy Advance along with Laser Squad: Nemesis (in and of itself a sequel to X-COM's own predecessor Laser Squad).

In addition, fans have produced their own X-COM-flavored games, most notably Xenonauts, UFO: Aftermath and its sequels Aftershock and Afterlight.

of UFO Defense (and later X-COM: Terror from the Deep) was released for playtesting. OpenXcom itself has enabled total conversions like the Warhammer 40K mod, The XCOM Files and Piratez.