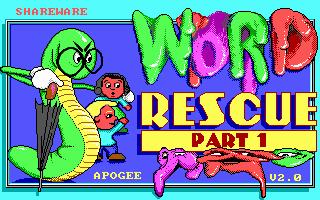 Word Rescue is an educational platform game written by Karen Crowther (Chun) of Redwood Games and released by Apogee Software in March 1992.
Advertisement:

Like many Apogee games of the time, Word Rescue includes three episodes, with only the first episode playable in the shareware version.

Apogee still sells the registered version of this game.

The game is followed by Word Rescue Plus and Math Rescue.

The story centers on creatures called "The Gruzzles". Because the Gruzzles cannot read, they steal words out of books, preventing others from reading as well. Playing as a boy or girl, the player must help Benny Bookworm take back all the stolen words and match them with their meanings so that he may put them back into the books.