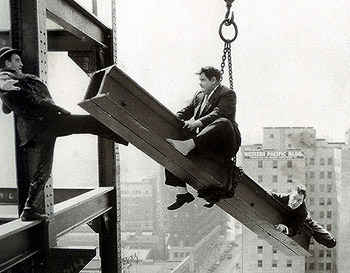 How irresponsible! They forgot their hard hats!
"Don't worry, boy. Another girder always swings in for you to walk on right when you get to the end."
— Homer Simpson, The Simpsons, "The Fool Monty"
Advertisement:

A once-common stock setting, the construction zone, normally pictured as the skeleton of a skyscraper made up of steel beams, tends to be the place that every sleep walker or escaped baby inevitably wanders into, giving way to crazy slapstick antics as their pursuer tries desperately to catch up with them and keep them out of harm's way. Said constructions zones almost always have No OSHA Compliance, so when our bumbling protagonist gets a job working at one, there's bound to be trouble.

Things to watch out for include super-heated rivets, malfunctioning elevators, wooden beams or steel girders dangling from cranes (which have an eerie way of positioning themselves at just the right moment to prevent someone from falling), or spilled grease upon a high steel beam threatening to send a character sliding off a ten-plus story drop. Also, expect to see a Literal Cliff Hanger, though if someone actually falls, they're likely to just safely land in liquid cement and become statues when they try to climb out.

It doesn't show up very often today, but Western Animation kept it alive long after it mostly fell out of use in Live Action Film. It also served as a convenient setting for arcade and platform video games for a time.

How to break nuts with a steam hammer?

How to break nuts with a steam hammer?