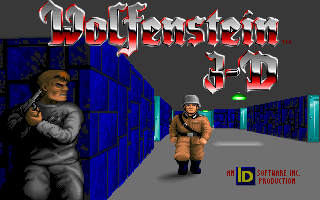 Wolfenstein 3D is a shareware game developed by id Software in just two months, and published by Apogee Software in May of 1992. Often regarded as the first true First-Person Shooter; although very primitive entries in the genre had been available since 1973 (Including id Software's own Hovertank 3D and Catacomb 3-D), it's the Trope Codifier, and any modern FPS traces its gameplay lineage back to it (Apogee's Rise of the Triad was the most direct successor, being built on top of the Wolf 3D codebase).

The story is simplicity itself: American soldier B.J. Blazkowicz is imprisoned in the Nazi stronghold of Castle Wolfenstein, and must walk through endless corridors, find keys and shoot Nazis until he escapes. Following chapters, which could be mail-ordered, had somewhat more out-there storylines, with Operation: Eisenfaust requiring you to thwart a Nazi doctor performing horrible biological experiments, and Die, Fuhrer, Die! allowing you to take down Adolf Hitler himself. As he attacks you in an armored battle suit with quad-miniguns. There's also a prequel trilogy of episodes, entitled the "Nocturnal Missions", in which B.J. assassinates a Nazi chemical weapons scientist (A Dark Secret), uncovers his plans for a chemical war (Trail of the Madman) and finally kills the general carrying it out (Confrontation).

Advertisement:
Wolfenstein 3D was made without the involvement or knowledge of the original Castle Wolfenstein creator, though it was envisioned from the start as a successor to those games. They were doubtful that they would actually get to use the Wolfenstein name, but they asked around. It turned out that the original game's publisher had gone out of business, and nobody had ever acquired the trademark; it had since expired. So the name was just free for the taking.

It was followed by Spear of Destiny in September 1992 (which is a prequel in which B.J. storms Castle Nuremberg to retrieve the eponymous spear from the Nazis), and in 1994 by "Return To Danger" and "Ultimate Challenge", two further missions for Spear of Destiny.

A company called Wisdom Tree created an unlicensednote As in, not sanctioned by Nintendo, as the Wolfenstein engine itself was licensed Christian-themed modification based on the SNES port. Titled Super 3D Noah's Ark, it changed the guns into a fruit-shooting slingshot and the enemy soldiers into animals. An Updated Re-release of this game (of all things) came about in 2014, based on the ECWolf source port following surprise interest in redistribution of the original SNES cartridge version, released on itch.io in May of 2014 and managing to make the jump to Steam in June 2015.

Console ports include the Super NES, Game Boy Advance, Jaguar, 3DO, Xbox 360 and PS3 (as a downloadable title on the latter two platforms). It is also included as a Game Within a Game in Wolfenstein II: The New Colossus, but with a Perspective Flip twist: titled "Wolfstone 3D", players assume the role of Elite Hans fighting rebels in order to kill "Terror Billy".

Followed canonically with Return to Castle Wolfenstein, which revived the franchise in 2001.