"And every one around Henry Freeman said... 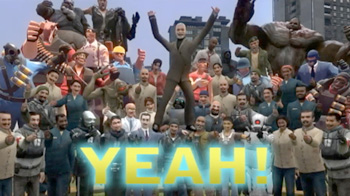 The main characters run towards the camera and jump in unison, putting on their most ridiculous smile and holding their hands in the air. Sometimes a bright light inexplicably appears behind them. The scene freezes while they're all in midair and is used as a splash screen for something. May or may not combine with a Pastel-Chalked Freeze Frame. Frequently an ending. In more realistic works, the characters might freeze while doing something we would actually expect to see in our own lives, like joyously hugging or throwing their hats in the air. (Or, at the other extreme, the characters might self-consciously milk the trope for all its humor by doing something funny, such as flashing the "Ta-da!" or "jazz hands" gesture at the audience.)

This trope was ridiculously common in movie endings in The '70s. Rocky did it most famously, but it managed to sneak into the endings of more serious films too.

Likely as often as not nowadays to be parodied or deconstructed, usually with Gravity Is a Harsh Mistress coming into play.

Similar in style is the "Kirara Jump" seen in the openings of a lot of anime Slice of Life and "Cute Girls Doing Cute Things" shows.

After Mordecai, Rigby and the baby ducks save the park from the evil geese, all Benson can do is scold them for the destruction they've caused, until Mother Duck steps in to defend them.

After Mordecai, Rigby and the baby ducks save the park from the evil geese, all Benson can do is scold them for the destruction they've caused, until Mother Duck steps in to defend them.