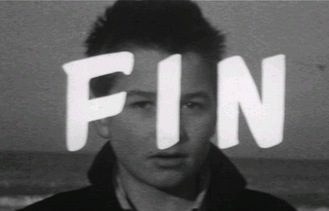 His stare will last 400 blows.
Advertisement:

A common trope, this is the use of a freeze-frame at the end of a work.

The moving image, most typically if not always a close up of a character's face, turns into a still. It may or may not get a zoom. The character is usually in a dramatic pose, or with a specific expression. Freeze. Roll credits.

The character is usually the protagonist, and the pose can be of a variety, but often a smile, laugh or a Double Take.

Though now a technique used more meaningfully — often to connect with the character — or as parody, in some Eighties whodunits it was treated as a standard of its television show format.

In the field of Film Studies, scholars promote François Truffaut's The 400 Blows as the earliest notable use (or Ur-Example). At the end there is a freeze and then zoom on the young protagonist's face as he looks, conflicted, at the camera. The scene was also used as both the original promotional and cover image for the film, possibly the first time such a scene has made it into mass marketing.

One variation is a 'flash' sequence, when there is a freeze frame featuring the initial credits before possibly a Stinger and then the actual credits.

This trope can be specific kind of Fourth Wall-breaking, in instances when a character looks directly into the camera, but still is not completely breaking the fourth wall as it is often treated as an addendum to the actual work. It may also be a Pastel-Chalked Freeze Frame. Compare Group Picture Ending and "YEAH!" Shot.

Wolf ends his story by having Beef, Delmar, and Deppy jumping in the air for a hi-five but Deppy misses and the screen freezes while "The End" pops up.

Wolf ends his story by having Beef, Delmar, and Deppy jumping in the air for a hi-five but Deppy misses and the screen freezes while "The End" pops up.