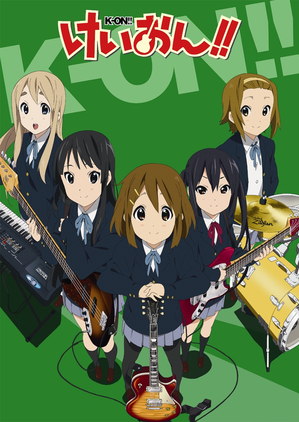 When Sakuragaoka High School's Light Music Club (keiongaku-bu) is about to be disbanded with all of its members graduating, Ritsu Tainaka seizes her chance to become a club president without actually being elected and drags her shy friend Mio Akiyama along for the ride. They recruit two more students in order to meet the minimum member requirement: Tsumugi Kotobuki, a wealthy blonde who was looking for another club, and Yui Hirasawa, an airheaded girl whom they tempt with numerous sweet things until she agrees to join.

With their new band formed, the four come to a sudden realization: none of them can play an instrument that well. The group sets off to improve their musical skills, with plenty of Slice of Life cuteness along the way.

The show follows their progress as they get a club adviser (Sawako Yamanaka, an alumna of the Light Music Club), decide on a band name (Houkagonote after-school Tea Time), write their first original songs and finally perform on stage. Later, they recruit an additional guitarist: Azusa Nakano, a hard-working musician bewildered by the eccentric and relaxed attitudes of the other members.

The yonkoma manga by Kakifly, serialized in Manga Time Kirara from 2007 to 2012, was turned into an anime by Kyoto Animation in the spring season of 2009. The show was directed by Naoko Yamada (making her directorial debut), with Reiko Yoshida serving as series composer, and Yukiko Horiguchi serving as character designer and chief animation director. The show proved to be a runaway success, with the opening and ending themes topping out at #1 and #2 in the Japanese music charts as well. The manga has been released in English by Yen Press. The second season, K-On!! (note the two exclamation points), aired in the spring of 2010 for 26 more episodes. A film

was announced after the second season ended; it was released on December 3, 2011.

that they had licensed the first season in the US and Canada. In August of that year, they announced they would dub it with Bang Zoom! Entertainment. The first volume of the English dub was released on April 26, 2011. In early 2012, Sentai Filmworks licensed the second season, complete with the same dub cast. The first season is licensed to Manga Entertainment in the UK, and both seasons (as well as the movie) are distributed by Madman Entertainment in Australia and New Zealand. In 2012, Sentai Filmworks announced they acquired the movie and will also dub it. They did so, releasing it on May 21, 2013. They would later re-acquire the rights to Season 1 in 2014. The dub airs in Australia on ABC3 starting 19 June 2015.

Kakifly has made two one-volume sequel manga series: K-On! College, which follows the four high school graduate members into their life at college, and K-On! High School, observing Azusa's efforts to keep the Light Music Club alive. These series have been released in English by Yen Press just like the original manga.

All characterization tropes are listed on the character sheet subpage.

Example of:
Toast of Tardiness