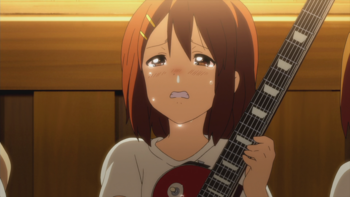 "It's sweat, not tears!"
Spoilers Off applies to all Tear Jerker pages, so all spoilers are unmarked. You Have Been Warned!
Advertisement:

You wouldn't expect a show where a group of adorable high schoolers play music and eat cake to make you cry, but K-On! manages to find a way.