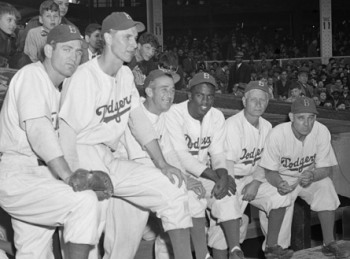 One of these guys is not like the others.
Homer: Then that makes me the Jackie Robinson of the sport, and you are the racist Philadelphia manager!
Marge: Quit comparing me to Ben Chapman!
Homer: I will when you open your mind to change!
— The Simpsons, "Luca$"
Advertisement:

A minority resolves to join a profession dominated by an excluding majority.

In their attempt, the character is subjected to considerable verbal abuse, threats and attempted sabotage by the bigoted members of the profession. In response, the focus character shows considerable skill and iron determination to see the challenge through. Meanwhile, sympathetic main characters offer to help while understanding the focus character's insistence on success on their own to gain credibility.

Often there is one final challenge that the focus character must face and, in a climactic moment, the character succeeds, proving their worth in spectacular fashion and setting a valuable precedent for others.

Often a subtrope of Breaking the Glass Ceiling. Contrast with "Gender-Normative Parent" Plot, that's about a boy's "unmanly" hobby is disapproved of the people around him. Compare Sweet Polly Oliver. Also see the subcategory of You Go, Girl!, although that is usually more light-hearted.