Film / In a World 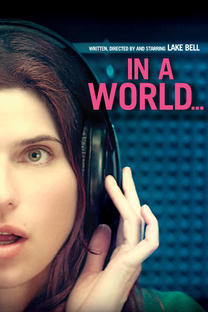 Speak up, and let your voice be heard.
In a World... is a 2013 American comedy film directed, written, and co-produced by Lake Bell. The film co-stars Demetri Martin, Fred Melamed, Rob Corddry, Michaela Watkins, Ken Marino, Nick Offerman, and Tig Notaro. The film was a financial success, grossing nearly $3 million on a budget of less than $1 million, and received positive reviews from critics.
Advertisement:

The film stars Bell as Carol Solomon, a vocal coach intent on doing voice-over work for film trailers. She lives in the shadow of her much more famous father, Sam Sotto, and faces sexism from an industry that favors male voices, but presses on, reluctantly supported by her Workaholic sister Dani and Dani's long-neglected husband Moe. Carol regularly does voiceover work at Sound Mix-A-Lot with its owner, Louis (who's long had a crush on Carol), and co-workers Heners, Cher and Nancy. When an opportunity finally arises to voice a series of movie trailers, Carol goes for it, only to find herself in competition with her father, and the man her father is mentoring, Gustav.

It is not the Trope Namer for In a World…, although the use of the eponymous phrase in a major motion picture trailer is a plot point.

In a World... provides examples of the following tropes: