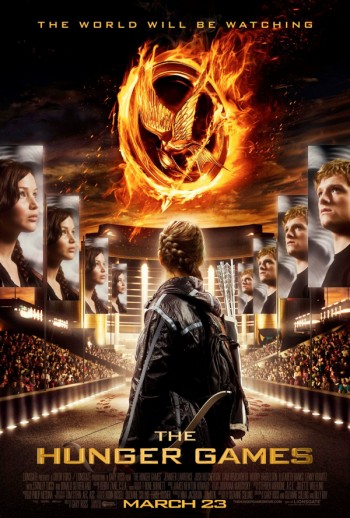 May the odds be ever in your favor.
"Hope, it is the only thing stronger than fear. A little hope is effective, a lot of hope is dangerous. A spark is fine, as long as it's contained."
— President Coriolanus Snow
Advertisement:

The Hunger Games is the feature film adaption of the book of the same name. The film was released on March 23, 2012.

In a dystopian future, the totalitarian nation of Panem is divided between 12 districts and the Capitol. Each year two young representatives from each district are selected by lottery to participate in The Hunger Games. Part entertainment, part brutal retribution for a past rebellion, the televised games are broadcast throughout Panem. The 24 participants are forced to kill their competitors while the citizens of Panem are required to watch.

The film is directed by Gary Ross, and stars Jennifer Lawrence as Katniss, Josh Hutcherson as Peeta, Liam Hemsworth as Gale, Woody Harrelson as Haymitch, Stanley Tucci as Caesar and Donald Sutherland as President Snow.

Adaptations for the remaining novels were also made. The Catching Fire movie was released in November 2013, and Mockingjay was split into two films, with part one being released in 2014 and part two in 2015. A prequel, adapting The Ballad of Songbirds and Snakes, is set for release in 2023.

The Hunger Games provides examples of: