How Dare You Die on Me! 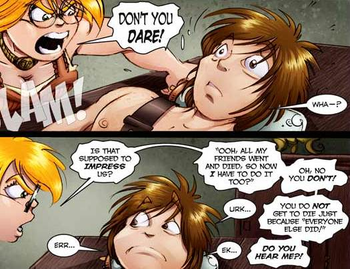 Guy falls while Taking the Bullet for the Damsel in Distress. It's not Only a Flesh Wound, nope, he looks dead. Enough to be Left for Dead by the villain. Possibly invoking Pietà Plagiarism, the damsel cries over but curses the guy. She may even feebly beat up his dead body, admonishing him for:

In more optimistic works he'll wake up because, well, there's someone yelling and hitting him, and Death Is Cheap compared to that. Expect Slap-Slap-Kiss as he'll be annoyed at being yelled at after just saving her life, and they get over it and (mushy stuff happens here). If it's a really sappy setting, expect a kiss to be involved in waking up their beloved. Sometimes, if he does die, he will leave something of himself behind.

The genders can be reversed, and it's also a favorite trope to enact between Rivals or even enemies, especially if one of them died through means other than at the Rival's hands. Compare Antagonist in Mourning.

May happen some time after the wound, when the first person believes the other is dying and tries to Converse with the Unconscious.

Can also occur after a failed attempt at resuscitation, often accompanied by a Big "NO!" or "live, damn you!". Common in medical dramas.

Compare and contrast Try Not to Die. May overlap with Died in Your Arms Tonight. May overlap with Anger Born of Worry if the person hopes the victim will pull through but fears the worst. As a Death Trope, beware of unmarked spoilers.