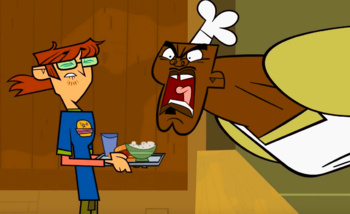 Mr. T: Sucka, you have a choice: You can face prison or you can face me.
Crook: Prison! Prison!
Advertisement:

The black characters in anime are usually some variation on this.

Note that the character doesn't necessarily have to be of African descent, just large, imposing, brown/dark-skinned, and have a tendency to make people wet themselves with a single glare. If a Black male character has other characters fearing him after he performs a certain action he is not a Scary Black Man, a Scary Black Man has people fearing him because of his intimidating appearance. Despite some of the Unfortunate Implications associated with this Trope, some of these characters become popular because of how badass they are. The obvious subversion is to make this character not nearly as scary personality-wise as their imposing first appearances might otherwise suggest. Another subversion can be to have the character only act this way in certain specific situations — a man might be a loving father and an otherwise affable and easygoing person... who immediately turns into an enraged Papa Wolf whenever his loved ones are threatened.

Despite the trope name, female examples do exist. But since female characters are rarely portrayed as fighters or overtly threatening in the same way that male ones are, Scary Black Women remain a distinct rarity, and are more commonly portrayed as sassy black women instead.