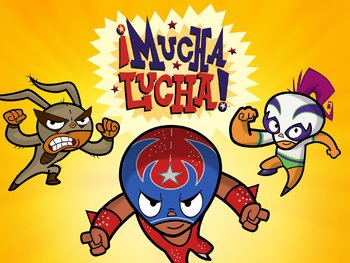 From left to right: The Flea, Rikochet, and Buena Girl
Advertisement:

¡Mucha Lucha! (roughly translated to A Lot of Wrestling!) was a Flash-animated show (one of the very first in fact) that ran on Kids' WB! from 2002 through 2005.

Running for 52 episodes (and being retitled ¡Mucha Lucha!: Gigante in its third and final season), the show focused on the young Luchadores (masked wrestlers) who are students at the FOREMOST, WORLD RENOWNED, INTERNATIONAL SCHOOL OF LUCHA!!!!. Most prominent of the students are the main trio, consisting of Rikochet, who aims to become Luchadore Supreme, and his two friends, The Flea and Buena Girl.

Advertisement:
"I've got one thing to say to you, wanna trade."