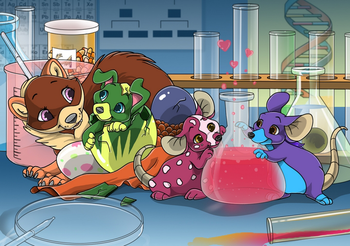 OviPets is a Web Game that's mostly accessed via Facebook. It is a Creature-Breeding Mechanic game that features over 25 species of pets that can be bred. The focus of the game is to breed successive generations of pets with more and different mutations.
Advertisement:

It is a free-to-play game but does have a pay feature that gives added perks.