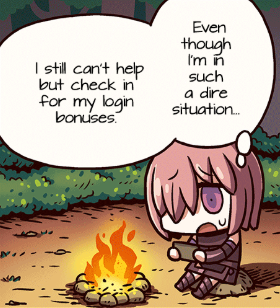 Even when trying to escape from a bunch of lunatics, those daily items are pretty important.
This is when a game encourages you to play every day.
Advertisement:

Many games now feature persistent worlds, ones which are always on — and, in many cases, which cater to people from around the globe, meaning that someone is always playing, always doing activities within the game-world, at every hour of the day. This can be looped into a "Play Every Day" system in several ways:

The psychology behind this is fairly simple: the game wants you to become psychologically addicted to it. Playing the game becomes a habit entwined with a sense of achievement. It can also help players who don't have the time or energy to spend hours grinding away feel like they're still making good progress towards their particular goals.

Compare the non-interactive equivalent: Appointment Television, where you have to watch every episode when it airs or as soon as possible after you've recorded it.

Unicorn gives a walk-through for the mobile game ''Boobfart Jumpflop''.

Unicorn gives a walk-through for the mobile game ''Boobfart Jumpflop''.