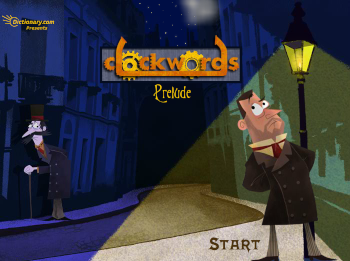 Clockwords is a typing game series in Adobe Flash by Gabob. Clockwords: Prelude was released in 2009, which introduced most of the gameplay elements, while Clockwords: Act 1 was released in 2010. The game has you play as a genius inventor who uses a machine to fight spiders which are trying to steal his documents and give them to his nemesis. This is accomplished by typing in words. The more letters in the chambers are used to construct the word, the more damage it does. If all letters are used, another chamber from the boiler is opened. It's unlikely that Clockwords: Act 2 or any future installments are going to ever come out due to the lack of news regarding the series, its creators, and the death of Adobe Flash.