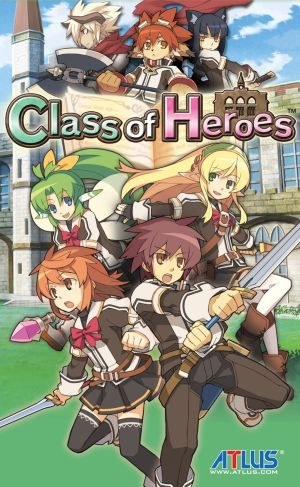 In a World… where children dream of growing up to become adventurers, their needs are catered to by a set of academies dedicated to providing guidance and teaching for the budding explorers. As a student of Particus Academy, you will learn the ups and downs of dungeon spelunking, with each quest solved and monster slain a step towards graduation.

It is with this premise that developer Zerodiv (and publisher Accquire) introduces to us to Class of Heroes for the PSP. Initially created as a Spiritual Successor to the Japan-only Xth subseries of the Wizardry franchise (To the point of using all of the same character races), the modest success of the first game resulted in three sequels, two (later three) ports and a spinoff.

Atlus took a chance on localizing the first game, which ultimately flopped. However, it garnered a cult following among fans of the genre, causing minor localization outfit Gaijinworks to use Kickstarter to fund their efforts to localize the second game. The successful kickstarter saw a limited physical release of the PSP edition as well as digital releases of both the PSP and PS3 editions. A kickstarter for the third game ended in failure, and with the collapse of GaijinWorks the finished-but-unreleased localizations of 3 and 3g were lost to time.

The franchise appears to be undergoing a resurgence as of late; In 2018, a remake of the first title for the Nintendo Switch, titled "Ken to Mahou to Gakuen Mono. Anniversary Edition" was released in Japan. In 2022, a remake of Class of Heroes 2 was announced for Switch and Playstation 4, alongside a new Strategy RPG spinoff titled "Adventure Academia: The Fractured Continent" (Ken to Mahou to Gakuen Kuesuto) which was announced for Switch, Playstation 4... and Steam, complete with a fully English storefront page and trailer.