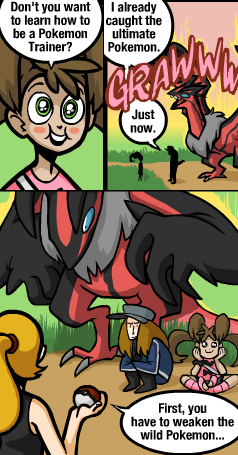 Gabe: Oh, for fuck's sake. I know how to jump, Kingdom Hearts! I'm good at jumping! I jump all the time. Gimme my fucking keyblade!
Nintendo DS: The microphone has detected bursts of profanity. Would you like to skip this incredibly long tutorial?
Gabe: Yes! A thousand times yes!
Nintendo DS: Before you can skip the Tutorial, you will need to complete the Tutorial Skipping Tutorial.
Gabe: GAAAAAAAAAH!
— Penny Arcade, "My Friend Totoriol"
Advertisement:

You've mastered this game. All that remains is to achieve 100% Completion on Harder Than Hard difficulty.

So, you start up a new game, choose your difficulty, skip the opening cutscene because you've seen it a hundred times, and it's time to...

Why are there forced tutorials in video games? Perhaps manuals do not exist, or even if they do, everyone knows nobody ever reads the damn things anyway. Therefore, it is a good idea to have an in-game tutorial to teach first-time players how to play. As for why the game would force players to do it, well... do you really think someone who refuses to read a manual would choose to play an optional tutorial? Hell no! Real men don't need instructions! Then, after said "real man" inevitably gets his ass handed to him because he doesn't know anything about the game's mechanics, he proceeds to blame the game for not explaining them to him. Perhaps the game is made for very young children who don't know how to read yet and would actually need this type of thing. Or perhaps the writer just crammed most of the exposition into the Justified Tutorial, and he'll be damned if he's just going to sit back and let you skip past all his hard work. Either way, Thou Must Do the Tutorial, for the 15th time. Might include Shall I Repeat That? and He Knows About Timed Hits.

Webcomics
Real Life
Would you like me to repeat that?
[Y/N]
You have found a mistake in this article. To fix a mistake, scroll to the top and hit the [Edit] Button.
Do you remember how to scroll?
[Y/N]
''When you've run out of words to read, you'll need to scroll the page. To scroll, simply find the scroll bar on the right side of this page, and click it with your mouse until you start seeing new words you haven't read before at the bottom of the page. Alternatively, you can use your arrow keys or, if you have a fancy-pants mouse wheel, use that to achieve the same effect. If you use the arrows on the numerical keypad, make sure num lock is off.
Do you want me to repeat all that?
[Y/N]
Let me start again then...