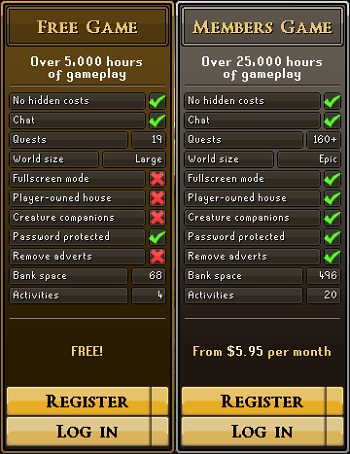 Paying players also get the "Free Player" mount, which they can beat savagely for transgressions.
Freemium! The "mium" is latin for "not really".
— South Park
Advertisement:

Games that run on a Freemium model will have two modes:

Unlike games that use Microtransactions, Freemium games have a binary distinction between those who pay and those who do not: you're either Free, or you're Premium. This tends to limit the Bribing Your Way to Victory effect—if you can only pay a fixed amount, you can't out-pay the other people who are paying. That's not to say that the two methods can't be combined—there are plenty of Freemium games that also feature Microtransactions.

If the game's marketing plays up features in the paid version of the game while advertising it as "Free", you probably have an Allegedly Free Game on your hands.

Of course, this model isn't limited to games. It's a common business model all over the internet. Even on this very wiki, making a modest monthly/yearly pledge

will remove the advertisements from the site for the duration of your subscription. *nudge nudge*