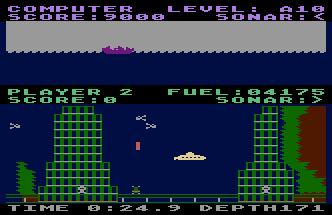 A ship that can only move left and right and drop depth charges and homing mines, vs. a submarine that can go anywhere and has to destroy underwater buildings. Totally different experiences.
Advertisement:

Asymmetric Multiplayer is a multiplayer mode in which the different players have totally different roles and capabilities, unlike most multiplayer games, where all the players are generally doing the same thing and playing the game the same way.

Nintendo popularized the term with their Wii U console, as a way to describe how one player could play the game using the touchscreen-equipped GamePad controller, while others play on the TV, and the two groups have very different goals and even game mechanics. An example is New Super Mario Bros. U, where players who use traditional controllers control characters who run and jump on the TV, while the GamePad player can interact with the environment by messing with enemies, placing blocks in mid-air, and doing other things that affect the TV players' experience.

However, the concept has been around since ancient (by video game standards) times. Generally, it is quite rare in games, as creating two completely different gameplay experiences for two different players requires a great deal of balance, especially if the two are competing against each other.

This does not refer to such things as games where players can be different characters (e.g., a magic user and a sword user) with slightly different abilities but carry out essentially the same goal in the same way. This instead refers to games where the roles, abilities and gameplay experience are drastically different. To see whether an example fits, think of the question "Does each player have a totally different experience from the others?" If the answer is yes, it's probably Asymmetric Multiplayer.

Compare Variable Player Goals, which are often paired with Asymmetric Multiplayer but not the same thing (as Asymmetric Multiplayer can have two players working towards the same goal different ways, and Variable Player Goals can have all players use the same game mechanics). A Social Deduction Game is a specific type of asymmetric game where the goal of one group of players is to figure out which players are secretly part of the other group.