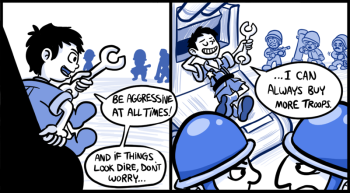 King Edward Longshanks: Archers.
English Commander: I beg your pardon, sire, but won't we hit our own troops?
Longshanks: Yes. But we'll hit theirs as well. We have reserves. Attack.
— Braveheart
Advertisement:

There are a lot of ways to have a character Kick the Dog or cross the Moral Event Horizon. In a war movie or battle sequence, if you want to show that a general, king, or commander is evil (really evil, not a Punch-Clock Villain and way beyond a Designated Villain), all you have to do is show his casual—if not complete—disregard for the lives of his own troops by either knowingly ordering them into certain slaughter or giving an order that directly results in their deaths. Retreat is, of course, forbidden; he expects Attack! Attack! Attack! without a second thought, and a Last Stand before retreat. (And he usually does it from perfect safety.) General Failure will often upgrade this from a last resort to his preferred tactic.

After a moment like this, the character might as well have asshole printed on his forehead. Bonus points if he refers to his troops as being trash or somehow subhuman, or if he does it not because he sincerely believes that doing this is necessary to win, but in pursuit of his own glory/making a name for himself. A We Have Reserves commander is very much a Bad Boss, and a reason why there is such a high mortality rate among Redshirt Armies, Faceless Goons, Mooks, and the like.

Note that this does not have to be done strictly in a war setting, and works just fine if, say, the Big Bad or The Dragon decides to sacrifice someone in a Quirky Mini Boss Squad, or a small band of mooks. Employing this under such circumstances when he probably does not, in fact, have reserves, is a form of the Villain Ball.

Callousness is necessary for it to be a suitable Kick the Dog moment. A general who throws troops into a battle knowing they will all die but also knowing a victory here will save more lives can be pardoned for it if he shows that he is aware of the cost (Drowning My Sorrows and Past Experience Nightmare are popular tropes for demonstrating that awareness). After all, one cannot get through a real war with zero casualties, and some number of losses must be accepted. The same thing applies for a commander of a stricken vessel who sometimes must seal off sections of a ship and doom the crew inside lest the entire ship is lost. An inexperienced officer who inadvertently does this may only be a moron or having a moment of panic while in command for the first time, and might still be redeemable if he shows Character Development because of it or improves his tactics.

The likelihood that the troops of a commander who does this trope regularly would probably fold like wet paper on the battlefield (few are willing to get themselves almost certainly killed just because someone said so) should logically be an issue, though the likes of fighters being organisms led by a Hive Mind, cultures relying on sheer zealotry, or other rationales may address this.

In more fantastical settings, most Necromancers and other undead-using sorts will gleefully send legions of their troops off to get re-killed, on the basis that no actual lives are being lost. Well, except for the enemy's. And that just adds to your own numbers. The dead do not kill, they recruit. (Depending on how the necromancy is represented, even the destroyed undead can be somewhat reconstituted.)

Compare Zerg Rush (where the opponent throws everything at you, disregarding any other battle plan), Cannon Fodder (a low-skill enemy with little planning that dies easily), Redshirt Army (when the good side employs this), Expendable Clone (where a character is his own reserves), and both Hammerspace Police Force and I Fought the Law and the Law Won (where law enforcement is the "reserves" in question). Also compare The Pawns Go First (when the formidable Big Bad sends out Mooks rather than engage in the fight himself). See also You Have Outlived Your Usefulness and You Have Failed Me for similar moments from a Bad Boss, and Gideon Ploy. Shoot the Messenger also relies on the Big Bad feeling that his mooks are completely expendable. Contrast Can't Kill You, Still Need You and Mook Depletion. The Neidermeyer is the most likely type of officer or leader particularly to use this tactic; Sergeant Rock and A Father to His Men (who may invoke The Men First) are at the opposite end of this scale. Subtrope of Quantity vs. Quality.

Alternative Title(s): We Have Reinforcements