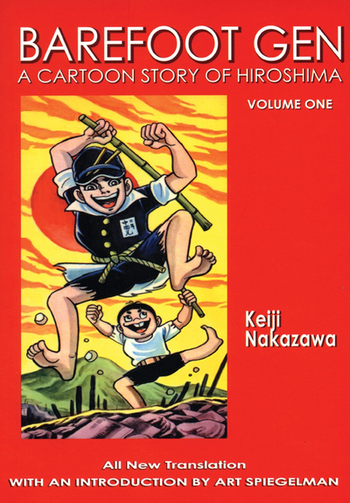 A cheery tale, right? Notice the word "Hiroshima."
"Wheat pushes its shoots up through the winter frost, only to be stepped on again and again. The trampled wheat sends strong roots into the earth, endures frost, wind, and snow, and grows tall... and one day bears fruit."
— Daikichi Nakaoka
Advertisement:

Barefoot Gen is a manga by Keiji Nakazawa, based on his experiences as a survivor of the atomic bombing of Hiroshima. It ran in Weekly Shonen Jump from 1973-74,note This might seem surprising for modern readers, but the shonen/seinen distinction wasn't really a thing at the time, and "shonen" magazines frequently featured series that would be considered unfit for them nowadays was made into a live-action drama, and a feature-length anime twice.

The story begins in August 1945. Gen Nakaoka is a young boy living in Hiroshima, suffering from wartime shortages and rationing. His family (father Daikichi, mother Kimie, older brothers Koji and Akira, older sister Eiko and younger brother Shinji) can barely grow enough food to feed themselves, and his pregnant mother is weak from malnutrition. While air raid sirens are a daily fact of life, the city has been spared the heavy bombings others faced. Gen prepares to show his brother a small wooden boat he earned.

And then, Little Boy drops. What follows are some of the most horrifying images put to paper.

In the chaos that follows the blast, Gen loses most of his family, and his mother gives birth prematurely. In the following weeks, they struggle to find food and shelter. Japan surrenders, the American occupation begins, and criminal gangs and the black market appear in force. Radiation sickness takes its toll. Gen, Kimie, Koji, and Akira must learn to survive in this changing world.

As Gen matures into a young man, the series takes on a more political tone, covering the social climate of the Occupation, the Korean War and Japan's rearmament, the search for meaning in the lost war, and finding an identity in the face of discrimination as a hibakusha (bomb-affected person/people). Though these parts tackle powerful subject matters, they are often overlooked by the public, either because they weren't made into movies, or perhaps because they come across at times as anti-American, anti-Japanese, and anti-Hiroshima City Government in particular. Regardless, the manga doesn't end with 1945. Read on.

A critically acclaimed work, Barefoot Gen helped break the silence surrounding the atomic bombings in Japan, and raise awareness about the hibakusha. It is one of the few Japanese works to avoid the nuclear weapons taboo.

Compare Grave of the Fireflies, which is about the air raids and officially Ghibli's most depressing movie, and Godzilla (1954), the movie that inspired Ishir⁠ō Honda and Toho to create the Godzilla series' roots through the aftermath of Hiroshima and the Lucky Dragon 5 incident 9 years later.