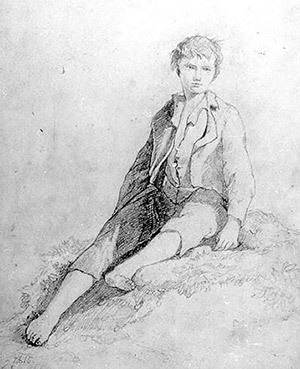 "One more coin and I can buy a pair of shoes."
— Beggars, The Elder Scrolls IV: Oblivion note They keep saying this no matter how many coins you give them.
Advertisement:

A character appears barefoot as a sign of their poverty. Usually, the camera will linger on their feet to emphasize the lack of shoes. Bonus points if they are shown walking in the snow and shivering from the cold. A common variation includes a shot of them looking at a pair of Nice Shoes with longing. Often used to make the character seem like a woobie.

Originally, nobody wore shoes until humans began moving into cooler climates, and then shoes were only worn when required by the weather. In the last thousand years, shoes gained prevalence through their association with status. Making shoes requires skill and wearing them meant you were above such things as walking on the ground. Thus those who wore shoes were the nobility, and those who aspired to be nobility (this is also how foot binding became

so popular in China

). Urbanization is another factor; going barefoot in a pastoral setting is one thing, but cobblestone streets can cut and abrade one's feet severely. These are the same factors that led to the development of the horseshoe.

It may seem strange nowadays, but being barefoot is entirely natural and was once completely normal in all cultures. While many cultures have yet to fully adopt the idea that walking barefoot is somehow shameful, those that never wear shoes have shrunk to small and usually isolated communities. Some cultures, such as the Maori, have a strong historical and social emphasis on walking barefoot and Maori schools often require children to not wear shoes.

Does Not Like Shoes may be a result of this if the character manages to get out of their poverty, or remain in poverty but claim to enjoy being barefoot anyway. A Sister Trope to Bankruptcy Barrel, Hobo Gloves and Pauper Patches. Compare Earthy Barefoot Character, Barefoot Sage, Barefoot Loon, Magical Barefooter, and Undead Barefooter.