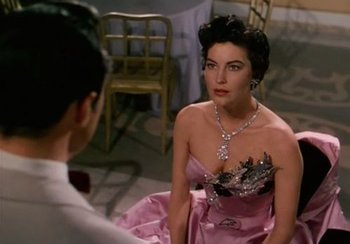 The Barefoot Contessa is a 1954 film written and directed by Joseph L. Mankiewicz, starring Humphrey Bogart and Ava Gardner.

Harry Dawes (Bogart) is a past-his-prime alcoholic film director who is trying to make a comeback after quitting drinking. Insufferable rich Jerkass film producer Kirk Edwards (Warren Stevens) has taken Harry to Spain to search out "a new face" for motion pictures. In Madrid they see a nightclub performance by castanet dancer Maria Vargas (Gardner). Edwards and Dawes are both enchanted. Maria takes an instant dislike to Edwards because he is an insufferable rich Jerkass, but she forms a bond with good-hearted Harry, and Harry convinces Maria to leave for America and take a shot at a career in the movies.

Maria adopts the stage name Maria D'Amata and becomes a huge movie star. Yet she is not happy, not being comfortable amongst the rich jet set, feeling more at home among the type of common people she grew up with. She rejects the attentions of loathsome Kirk Edwards, spending time with rich South American playboy Alberto Bravano (Marius Goring) instead. Then she finds love with an Italian count, Vincenzo Torlato-Favrini (Rossano Brazzi)—or so she thinks. Eventually, tragedy strikes.

Silent film star Bessie Love has one line as a guest at dinner.

Not to be confused with Barefoot Contessa, the Cooking Show hosted by Ina Garten, who took the title from this movie.