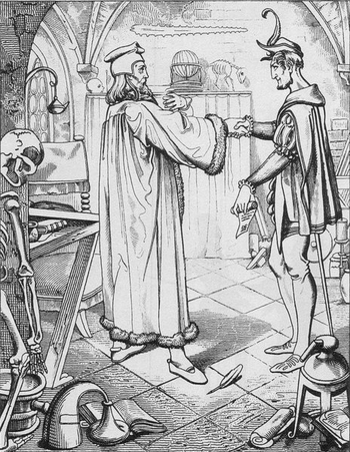 Faust is the central character of the archetypal story of a Deal with the Devil. Though there were earlier stories of individuals bargaining with demons for magical power (such as Simon Magus, Cyprian, and Theophilus, and others going back as far as ancient Sumer), it is the legend of an early 16th century German scholar that has been the most frequent and profoundest inspiration for works of art on this theme.

The original seems to have been a John or George Sabellicus, born near the end of the 15th century, a ne'er-do-well con-man who passed himself off as a scholar and conjuror. There is some confusion as to whether Faust was his real surname or a pseudonym, and as to whether it was derived from Latin faustus ("lucky") or the German faust ("fist"); he seems originally to have been described not as a doctor, but a master of arts; there is even some doubt as to his given names (Goethe calls him neither Johannes or Georg, but Heinrich) or whether there might not have been more than one Faustus. Be all that as it may, he seems to have made a living by various snake-oil type schemes (one was for a depilatory that took off not only the client's beard, but "the skin and most of the flesh as well"), until he came to a bad end — his body is said to have been found mutilated, sometime around the year 1540. Various magical manuals ascribed to Faust circulated the first quarter of the 16th century, at least one of which contains the name of a demon, "Mephostophiles" [sic].

The legend that he had sold his soul for magical powers, and had been torn to pieces by devils upon the expiration of the contract, seems to have sprung up immediately, spread by Lutheran preachers who used him as an Awful Example. The first surviving fictional account of his adventures was a chapbook that appeared in 1587, Historia von D. Johan. Fausten dem weitbeschreyten Zauberer und Schwartzkünstler ("History of Dr. Jno. Faust, the far-famed Wizard and Sorcerer").

In this or similar form the legend spread to England, where Christopher Marlowe would embody it in The Tragical History of the Life and Death of Doctor Faustus (first published 1604, probably written c. 1590). Marlowe suggests a more complicated figure than the mere seeker after wealth and pleasure presented in earlier versions; his play establishes Faustus as a great scholar, one who longs for Knowledge as well as Power, who turns to sorcery after he has already reached the limits of human science and philosophy. His Faustus vacillates more between God and the Devil than the simple character of the chapbook (his Good and Evil Angels appearing bodily, though presumably not in miniature form a few inches above his shoulders, given the conditions of the Elizabethan stage); given several opportunities to repent, he nevertheless proves obdurate, and is duly haled off to Hell, leaving the Chorus to point out the Aesop that there are Some Things Man Was Not Meant To Know.

Throughout the 16th and 17th centuries, the story proved popular in Germany in the form of chapbooks and puppet plays, often incorporating a great deal of humor and spectacular effects. Certain episodes became standard: Faust summoning up Mephistopheles; Faust disputing with him on the nature of God and the universe; Mephistopheles mocking Faust's scholar-servant, Wagner; Faust gaining the love of Helen of Troy; Faust appearing at the court of the Emperor; Faust or Mephistopheles in invisible form playing pranks on The Pope; Faust being given the chance to repent and refusing; and, finally and inevitably, Faust being dragged off to Hell by devils on the expiration of his contract. A subsidiary episode, in which Faust demands marriage with a virtuous peasant girl and is refused by Mephistopheles on the grounds that marriage, being a sacrament and thus pleasing to God, is against the terms of the contract, would form the basis for the story of Margaret (Margarethe, Gretchen, Marguerite) in subsequent versions of the story.

The greatest embodiment of the story is probably Johann Wolfgang von Goethe's Faust: Eine Tragödie (begun c. 1770). Published in two parts: the first (1808) tells the story of Faust's pact with Mephistopheles and his affair with the hapless Gretchen; the second (1832) recounts his union with Helen of Troy and the birth of Euphorion, the Spirit of Poetry, from this mating of northern Romanticism and Greek classicism. Despite the work's title, Goethe would seem to have been the first to have given the Faust story itself a happy ending (though earlier Deal with the Devil stories had sometimes featured Christ, the Virgin Mary, or some saint, tricking the devil out of his prey, often in an elaborate trial scene featuring a number of quite far-fetched legalistic quibbles) — Faust is redeemed from Hell because he uses his magical power to serve his fellow men, rather than exploit them. Goethe also popularized the image of Mephistopheles as a Deadpan Snarker in red silk doublet and hose (leading to the modern "devil in tights" image); his devil is less an elemental spirit of pure Evil than a sort of universal cynic.

Most subsequent versions of the Faust story either base themselves on one of these two dramas or react against them. The character has been depicted by artists such as Rembrandt and Delacroix; and by composers such as Hector Berlioz, Franz Liszt, Charles Gounod, Arrigo Boïto and Richard Wagner. Faust has also appeared in cinematic versions, such as Murnau's Faust: Eine deutsche Volkssage (1926) and Jan Švankmajer's Faust (1994); while Goethe's version of the story inspired a musical adaptation in two linked albums from metal band Kamelot, Epica (2003) and The Black Halo (2005).

Not to be confused with animator Lauren Faust, a certain baldheaded ex-homicidal doctor, or the German experimental band.

Tropes associated with the Faust story in its various versions: