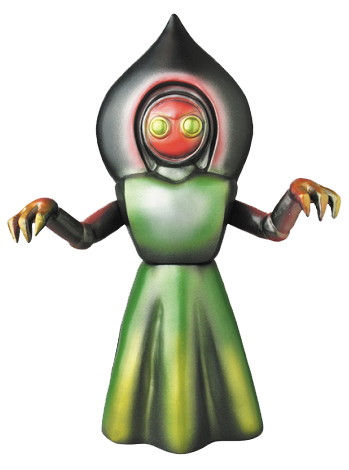 The Flatwoods Monsternote Also known as the Sutton Monster, the Green Monster, the Phantom of Flatwoods, and the Braxton County Monster. is a cryptid and alien archetype that sprung from an event that occurred on September 12, 1952 in Flatwoods in Braxton County, West Virginia, United States. During the evening hours, a group of seven, among which were one adult and one 17-year old member of the National Guard, went to investigate a bright object that had been seen falling from the sky. What they found, in the singular moment before they dropped the flashlight and ran in fright, was the Flatwoods Monster. The witnesses have described it as a 10-foot tall man-like figure with glowing eyes set in a round, red face framed by an ace of spades-resembling hood. The rest of its body was dark green, either by itself or from reflecting the surrounding leaves, and its overall shape dress-like. It had claw-like hands attached directly to its torso and an unsteady gliding form of motion. There was also report of a nauseating mist that caused symptoms akin to those from exposure to mustard gas.
Advertisement:

The first composite drawing of the Flatwoods Monster was made for the broadcast of We The People on September 19, 1952 by an unnamed artist. This drawing became the defining look and pose of the monster, despite some discrepancies with the testimonies such as that the monster didn't have arms.

Another influential entry in the lore is a report from a couple who were driving on a deserted road with their 18-month old child on the night of September 13, 1952. Nearby Frametown, 16 miles from Flatwoods, their car came to a standstill and the family was beset by a noxious mist smelling of ether and burnt sulfur. A purple light from the surroundings woods announced the arrival of what would become known as the Frametown Monster. The couple has described it as a 9-foot tall, reptilian humanoid with two spindly fingers per hand. From the waist down, the monster was hidden in a hovering metallic cone. Once it left, the car started working again. The ostensible relation between the Frametown Monster and the Flatwoods Monster is a matter of debate, but it has pushed the interpretation that what was seen of the Flatwoods Monster was a space suit or something mechanical.

Conventional commentary on the Flatwoods Monster holds that the object seen was a meteor and the figure seen was a barn owl hunched downwards atop a branch. The illness has been attributed to the period of severe panic the witnesses experienced,note Keep in mind that the event occured during the early stages of the Cold War, when threats of invasion and terrifying new weapons already had everyone on edge. while the smell could've been anything, including grass. There are no explanations for the Frametown Monster on account of there being no proof anything was seen in the first place.

These days, the Flatwoods Monster is a core part of Flatwoods's tourism industry, but does not enjoy much popularity in American fiction. On the other hand, it is a well-known UMA in Japan. It goes by the name "Flatwoods Monster" over there too, but also is referred to as the "3M no Uchuujin"; "3 Meter Tall Alien". It entered Japanese pop culture through shounen magazines in the 1960s and 1970s, which sometimes claimed the seven witnesses were all children.

Sub-Trope of Our Cryptids Are More Mysterious. Sister Trope to Reptilian Conspiracy and The Mothman, another owl-based West Virginian cryptid-or-alien. Not To Be Confused With the Hopkinsville Goblins, which were fought by the Sutton Family, whereas the Flatwoods Monster used to be known as the Sutton Monster because of the county seat.

A Zetan alien that kidnaps fauna for experimentation. It can be very rarely found around the map, but mostly near Flatwoods.

A Zetan alien that kidnaps fauna for experimentation. It can be very rarely found around the map, but mostly near Flatwoods.