Kid with the Leash 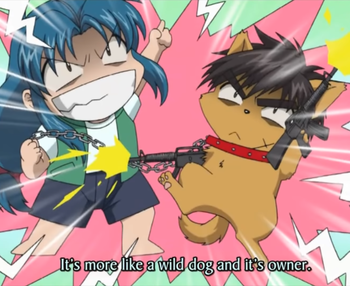 And if he goes the whole day without shooting someone, he gets a biscuit!
Yami Yugi: Couldn't I just mind-crush [Pegasus]?
Yugi: You can't fix all your problems by mind-crushing people!
Yami Yugi: Oh, come on! Just one little mind-crush, it'll barely hurt him.
Yugi: No! Bad pharaoh! No mind-crush!
— Yu-Gi-Oh! The Abridged Series, Episode 18
Advertisement:

The Kid with the Remote Control, but with a twist: the controlled partner or servant is pragmatic at best, and a raving loon at worst. The loyalty of the servant varies, but the typical example is essentially a portable version of Sealed Evil in a Can — though a very loyal one can be even creepier. The servant openly admits his opinion that the best way to deal with obstacles and enemies is through complete annihilation. The kid (who is usually younger) is the moral compass who has to keep it under control (with a little help from the Restraining Bolt), and more importantly not fall victim to temptation.

Naturally this works both ways, where the monster learns empathy and grudgingly accepts his master might not be so bad, while the handler learns not all things are as black and white as they think.

This is one of two things that can result from trying to control Sealed Evil in a Can. For the other, more cynical outcome, see Evil Is Not a Toy. Compare Guardian Entity and Morality Chain, when the restraining is more emotional. Also see Villain Holds the Leash.

Alternative Title(s): The Kid With The Leash