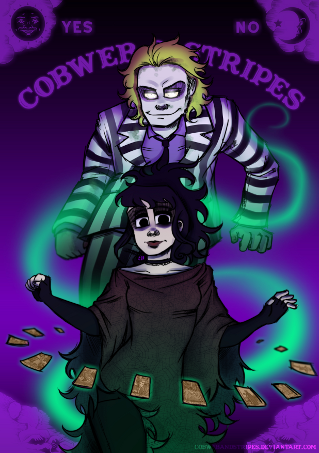 Cobweb and Stripes was a Fan Webcomic on DeviantArt and Tumblr. This is what happens when a talented Polish artist decides to show how the elements of Beetlejuice and the drastically different animated series could be fused together into a cohesive whole.

Along with her father and stepmother, Lydia Deetz moved from New York City to a large house in New England. It turned out the house used to belong to the Maitlands, a young married couple who died in an unfortunate accident. The Maitlands' ghosts didn't want to share their house with new occupants, and decided to summon a bio-exorcist - Betelgeuse. But as his methods turned out to be more harmful than anticipated, the Maitlands chose to deal with the Deetzes by themselves. Moreover, they were growing fond of the teenage Lydia. Then, when a friend of Lydia's stepmother somewhat unintentionally started performing an exorcism on the Maitlands, Lydia summoned the mad ghost to save them. To pay the price of this aid, Lydia agreed to marry Betelgeuse. However, in the nick of time, the ceremony was cancelled; Betelgeuse was chased away, and the Maitlands and Deetzes agreed to coexist in harmony. Everything ended well.

It's been two years since that strange, strange night, and only the Maitlands and Lydia remember everything that happened. One day, the Maitlands have news - they have gotten far enough in the Neitherworld paper trail that they can start the process of moving on to whatever awaits. Just after they break this to Lydia, a familiar bio-exorcist appears in her bedroom with some news of his own; having been arrested for an unrelated crime, he's invoking an ancient, rarely-used magical law, and Lydia is given the task of being Betelgeuse's "anchor" in the real world until his case goes to trial.

The comic follows their growing relationship from that point forward, as it takes turns neither of them expected.

Regrettably, in May 2020, after a hiatus of roughly a year, the artist announced that she will not be returning to the comic, owing to burnout from finishing her master's degree and other obligations being more pressing. Both the deviantArt and Tumblr accounts have since been deactivated, although the comic pages can still be found on Pinterest.

Tropes that appear in Cobweb and Stripes include: