Anywhere but Their Lips 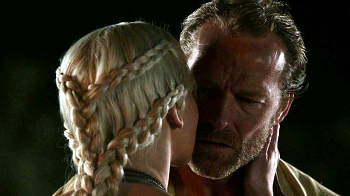 I'd like to be, not evil,
But a little worldly wise—
To be the kind of girl designed
To be kissed upon the eyes
— The Fantasticks, "Much More"
Advertisement:

Maybe a kiss on the lips is too intimate (or not enough!) for the situation. Maybe the writers just wanted to be unique. Regardless of the reason, there's one thing in common with these kisses — none are on the lips. See also I Kiss Your Hand and I Kiss Your Foot.

Some censors make this trope mandatory (that is unless certain parts are kissed).

Subtrope of Affectionate Gesture to the Head. Compare Headbutt of Love and Non-Standard Kiss.