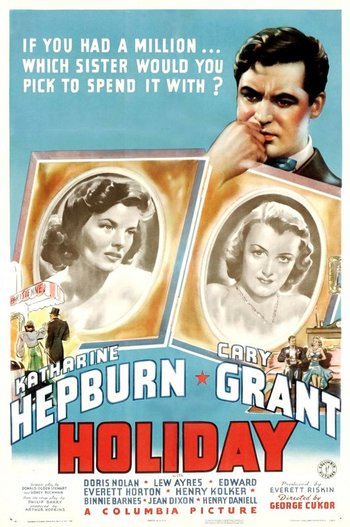 Johnny Case: I've been working since I was ten. I want to find out why I'm working. The answer can't just be to pay bills, to pile up more money...
Linda Seton: Yes, but what is the answer?
Johnny Case: Well I don't know. That's what I intend to find out. ... I want to save part of my life for myself. There's a catch to it, though: it's got to be part of the young part — you know, retire young, work old. Come back to work when I know what I'm working for. Does that make sense to you?
Linda Seton: That makes a lot of sense.
Advertisement:

A 1938 Romantic Comedy directed by George Cukor, starring Katharine Hepburn and Cary Grant. It is based on Philip Barry's 1928 play of the same name, which had previously been adapted to the screen in 1930. (Edward Everett Horton, who'd played Nick Potter in the earlier film, reprised his role in this one.)

Self-Made Man Johnny Case (Grant) has fallen in love with Julia Seton (Doris Nolan), not realizing that she belongs to one of the richest families in the U.S. When she brings him home with her, he is disconcerted to find that she lives in a mansion the size of the White House, that her brother Ned (Lew Ayres) is a drunk, and that her father (Henry Kolker) expects him to settle down and become a respectable businessman. Though still in love with Julia, Johnny finds that the member of the family he has the most rapport with is her elder sister Linda (Hepburn). She alone seems to understand his dream of taking a "holiday" (what today might be called a "gap year") to discover himself before he starts his career. As their friendship deepens, Johnny begins to wonder if his engagement to Julia has been a mistake, and Linda begins to care for him as more than a brother-in-law.

Interestingly, it was made by many of the same people behind The Philadelphia Story. Besides starring Hepburn and Grant, the movies also share a director, a playwright, and a screenwriter.

Not to be confused with the 2006 film The Holiday.