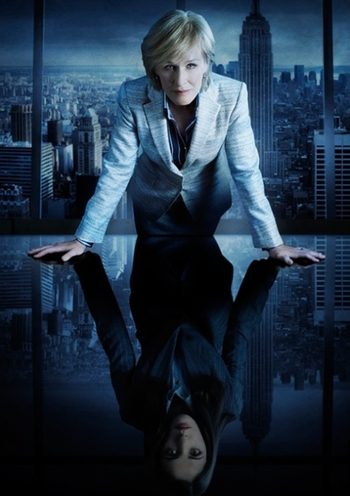 Margaret Thatcher has nothing on this Iron Lady.
"When I am through with you, there won't be anything left..."
Advertisement:

A dark conspiracy/thriller/drama series with a legal theme, starring Glenn Close as the ruthless lawyer Patty Hewes and Rose Byrne as her protégé Ellen Parsons. Unusually for a legal series, each season follows a single case in detail rather than a Monster of the Week format.

Damages is extremely dark, about as far on the cynical side of the Sliding Scale of Idealism Versus Cynicism as you can get - the "good guys" on this show, such as they are, would be villains in any other. The (Season 1 - anything beyond would contain spoilers) cast includes:

The show makes heavy use of Anachronic Order to create drama and tension, as the pieces of the Foregone Conclusion fall into place. Each episode reveals one piece of the puzzle in each the present and the future, and maintains a mix of events that a Genre Savvy viewer will catch on to just in time and twists that subvert such Genre Savvy to great effect. The political twists and turns are deep enough to make Tom Clancy blush, without becoming a Kudzu Plot.

Premiering on FX in 2007, Damages didn't maintain a strong viewership during its first season, and continued to drop in ratings afterward despite wide critical acclaim. The show was dropped by FX after three seasons and picked up DirecTV's Audience Network for two more, finally ending in 2012.

Now has a fledgling Character Sheet that needs some Wiki love.