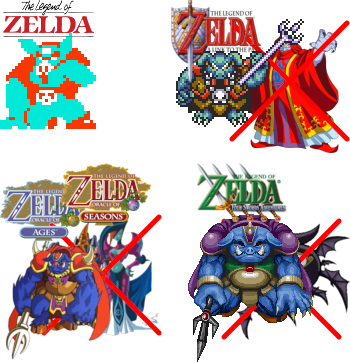 What? Were you expecting someone else?
Maybe that Zant guy?
Prologue: Hey! Did you know that in the last game there was this nutty computer that tried to kill everyone?
Yahtzee: No, I did not know that. Why did you bring it up?
Prologue: Errrrmmm, no reason. Here's a totally unrelated plot. Also try not to look at the box art.
— Zero Punctuation, System Shock 2
Advertisement:

A Sub-Trope of The Man Behind the Man, where an old villain is behind a new one.

This is common for iconic villains (such as many of the ones from Nintendo games) with Joker Immunity — no matter how many times the hero beats them, they keep coming back in the next game. Frequently, they even retry the same evil plot.

Another variant on this trope is when the new villain has no connection to the old one, but the old one manages to dethrone the new one and take over as the main villain.

While still a valid trope in other media, in video games, it's on its way to becoming increasingly difficult to take seriously. Due to just how ubiquitous the twist is, it's often seen as an overused and trite way of attempting a shocking plot twist (with the trope-naming Zelda series and other game series like Mega Man and its follow-ups such as Mega Man X, which likewise used the trope ad-nauseam, being by far the most infamous abusers of this) that it's no longer considered even mildly surprising to use in contemporary games. Modern games tend to avoid the trope save in series where it's practically expected (such as the aforementioned Mega Man series) and tend to either play the villains straight, subvert the twist or play the cliche for laughs.

Also a Sub-Trope of Obvious Villain, Secret Villain. Might be the result of the new villains managing to Resurrect the Villain or the old villain being a Returning Big Bad. The inversion of Make Way for the New Villains. Contrast Not Me This Time. See also Diabolus ex Nihilo and The Man in Front of the Man.

Nothing to do with Hijacked by Jesus.

Keep in mind that this trope is about plot twists, so EXPECT UNMARKED SPOILERS.