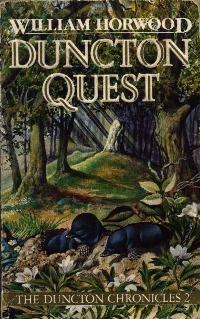 The second book of the Duncton Wood series, Duncton Quest tells the story of Bracken and Rebecca's son, Tryfan, as he leaves Duncton toward the Uffington system to become a scribemole himself. He arrives in Uffington with Boswell to find the place thrashed and devastated by the followers of the new religion of the Word, a rival of the Stone that rose from ancient times from the same source as the Dark Sound. He's then sent with Spindle to visit every one of the seven sacred systems to try and renew the faith in the Stone, accompanied by different Ragtag Bunches of Misfits to Buckland, back to Duncton, into the mysterious and oft never visited "twofoot" system of Wen and into the depths of the evil system of the Whern.