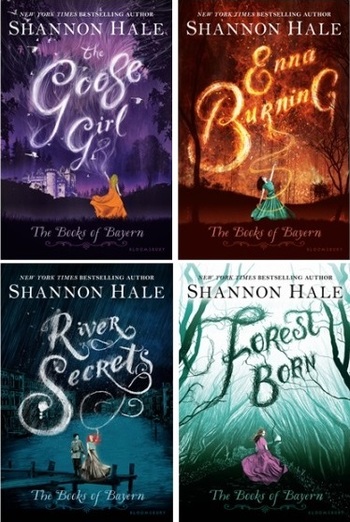 The Books of Bayern is a young adult fantasy series written by Shannon Hale.
Advertisement:

The Goose Girl, is the first volume in the series and is based on the Grimm's Tale original. The book is told through the perspective of the Crown Princess Anidori-Kiladra Talianna Isilee of Kildenree, better known as Ani or Isi to her friends. The story starts with Princess Anidori traveling from her home kingdom to the kingdom of Bayern to marry the prince and hopefully bring peace to their two nations. Halfway there, she is betrayed by her company as they attempt to murder her and replace her with her lady in waiting, Selia. Ani escapes, but then must make her way to Bayern alone. Fearful of Selia and her guards who still want her dead, Ani disguises herself as a city worker who tends to the geese as she plots a way to convince the king of her true identity. Three sequels feature the friends Ani meets among the city workers.

Volumes in the series: