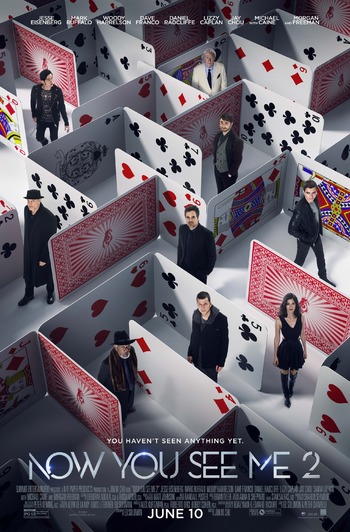 "This is simply my move. Next one is yours."
"Are you listening, Horsemen? When you emerge, and you will, I will be there waiting. Because mark my words, you will get what's coming to you. In ways you can't expect. But very much deserve. Because one thing I believe in is an eye for an eye."
— Thaddeus Bradley
Advertisement:

One year after the events of the first film, the Horsemen are starting to get antsy – they haven’t had a public performance since then, and there’s some dissention in the ranks – Henley has already left the Horsemen, and the others are waiting for new orders from The Eye. However, the Horsemen and their leader from the first film soon get a job to ruin the launch of a smartphone that could ruin the privacy of everyone in the world. Except that this job was a setup, and the privacy most ruined is the Horsemen’s own. Desperate, the team tries to pull off one last caper.

Now You See Me 2 provides examples of: