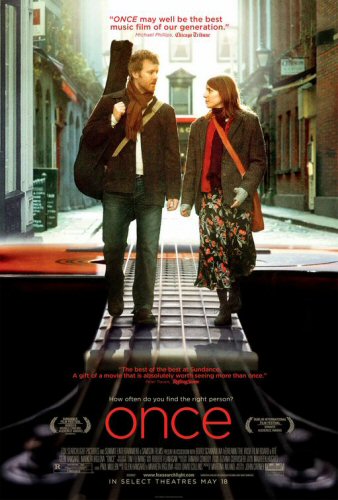 Once is a low-budget Irish movie about two musicians (Glen Hansard of The Frames and collaborator Markéta Irglová) who meet by chance and develop a relationship while writing and recording songs together. The film was made for €130,000 ($160,000 USD) and received significant critical acclaim for both its understated romance and for its music (no surprise, since Hansard and Irglová are professional musicians, not actors). The song "Falling Slowly" won the Academy Award for Best Song.

It almost missed its Oscar because parts of the soundtrack, including the winning song, were released on other albums by the same artists prior to the film being released. It was decided to give them their nomination (and inevitable award) anyway since though it technically broke the rules, the film had been in the can over two years by the time it was released, and Oscar glory had been completely outside their expectations. But let it be understood on no uncertain terms, this was far and away the favorite song of the year.

At 19, Irglová is the youngest person ever to win the Best Song Oscar.

Before, during and after the release of the movie Hansard and Irglova have performed as The Swell Season and have released two albums under that name, 2006's The Swell Season (containing many of the songs in Once recorded during the long time it took to get the film made) and 2009's Strict Joy (featuring songs about the end of Hansard and Irglova's real romantic relationship). Both were extremely critically acclaimed upon release.

The film was adapted into a stage musical in early 2012, and holds the distinction of being the first musical ever to have a Broadway run scheduled before it had even opened Off-Broadway. The show opened on March 18 to fantastic reviews, with most critics praising it for keeping to the spirit of the film while making the proper changes to make it work on-stage. It won eight Tony Awards out of eleven nominations, including Best Actor In A Leading Role (Steve Kazee), Best Book, and Best Musical. A US Touring production was announced and the show opened in Dublin, and later, the West End in 2013.

The Broadway musical contains examples of