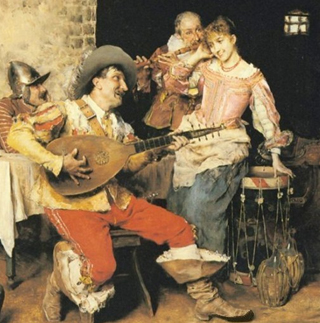 In your eyes, I see the doorway to a thousand churches...
"Once you've got her trust, it's time to make her feel special. Pick a song with her name in it. That always works."
— Catherine Wyler, Not Another Teen Movie
Advertisement:

Classic proof of love, from one paramour to another: Singing a love song to them.

Comes in two varieties: The solo serenade, where it's just the two of them alone together, or the public affair, where a crowd of people is watching. The former is more intimate, the latter is more showy, and if it is successful, may result in a Concert Kiss. Serenading someone in front of a crowd is a sign the performer isn't afraid to let everyone know they're in love. It's also a perfect set-up for a spectacular backfire if the suitor is unwelcome and/or utterly without musical talent. Solo serenades are often done under a balcony or outside window, usually with a guitar; Karaoke Bonding Scene might also be used in modern works.

Any romantic song will do, but you get bonus points if the song has the crush's name in it.

Predominantly male, for some reason, but female examples are not unheard of, like the iconic scene from Macross Frontier.

A Sub-Trope of Grand Romantic Gesture.

A Sister Trope to Let's Duet and Old-Fashioned Rowboat Date.

It could also be a Gift of Song.

With Dusty's help, El Chupacabra manages to win the heart of the Canadian-French beauty Rochelle.

With Dusty's help, El Chupacabra manages to win the heart of the Canadian-French beauty Rochelle.