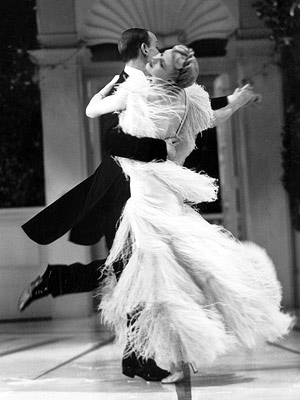 Jerry Travers: I'm sorry! I didn't realize I was disturbing you. You see, every once in a while I suddenly find myself...dancing.
Dale Tremont: Oh, I suppose it's some kind of an affliction.
Advertisement:

Top Hat is a 1935 Screwball Comedy Musical starring Fred Astaire and Ginger Rogers and is often cited as the most successful production in their joint career, with music by Irving Berlin.

Jerry Travers (Astaire) is an American dancer who comes to London to star in a show produced by his friend, Horace Hardwick (Edward Everett Horton). During the night, in their shared large suite, Jerry begins to loudly sing and dance about how he loves to sing and dance, disturbing Dale Tremont (Rogers) in the room below. Horace goes to talk to the management after their room is phoned and Dale confronts Jerry in the room upstairs, only for him to become instantly infatuated with her. She leaves angry and Jerry silently serenades her to sleep with a sand dance. After one more meeting and Jerry sending her flowers, Dale goes to the front desk to find out the name of the man in the room above her and they say it's Horace Hardwick, the husband of Dale's friend, Madge (Helen Broderick).

Hilarity Ensues as Dale continues to mistake Jerry for Horace, as he continues to win her admirations. Then it turns out that Madge has been trying to set up Dale and Jerry for a while. All the while, Dale is modelling dresses for Alberto Beddini (Erik Rhodes), a man who is equally trying to win her affection.

Digitally remastered versions of the films have been released to DVD over the years and a Screen-to-Stage Adaptation toured the UK in 2011, which received positive reviews. The production moved to Broadway in the US in early 2012 and returned to the UK to settle in the West End.

Tropes in Top Hat include: