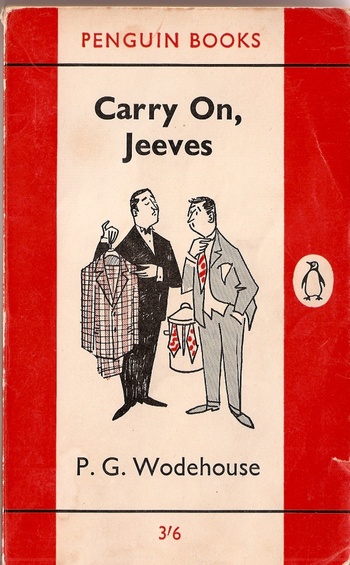 "You will find Mr. Wooster an exceedingly pleasant and amiable young gentleman, but not intelligent. By no means intelligent. Mentally he is negligible - quite negligible."
— Jeeves (from "Scoring Off Jeeves")
Advertisement:

Bertie Wooster and his valet Jeeves are fictional characters, created by British author P. G. Wodehouse. They have appeared in many comedic short stories and novels published between 1915 and 1974.

Wodehouse's most famous Upper-Class Twit, Bertram Wilberforce "Bertie" Wooster, is also the character who probably best embodies Wodehouse's gift for language. Bertie may be "mentally negligible", but as narrator of his own adventures he expresses himself with a loopy eloquence virtually unmatched in literature, giving this series its much-beloved Cloudcuckoolander sense of humor.

The plots tend to follow a set formula: life would be just about perfect for our single and very wealthy young man-about-London-town were it not for his inability to say no when his even goofier friends and/or imposing aunts come asking favours. Most often these are tied into typically Wodehousean love affairs, rife with comic misunderstanding and convoluted scheming, meaning that Bertie generally finds himself 'accidentally engaged' at least once or twice a book (in a couple cases, on and off over the course of several books). Of course, always the perfect gentleman (as the stern Code of the Woosters dictates), he would never correct a lady...

...Thankfully, Bertie's Servile Snarker uber-valet (not butler, though if the call comes, he can buttle with the best of them), Reginald Jeeves, is fully as capable as Bertie is ineffectual. With, apparently, the same effort most people put into buttoning their cuffs — and without so much as a flicker in his coolly correct facade — Jeeves steps in when all seems hopeless, rescues Bertie and/or his friends from their entanglements and restores the status quo. Often several times per book... because the fact that Bertie and co. are involved means there's always a chance the best-laid plans will go awry.

Arthur Treacher was Jeeves in two 1930's films, Thank You Jeeves and Step Lively, Jeeves!, with David Niven taking the part of Bertie Wooster in the first of them. In the Sixties, Ian Carmichael (better known for playing Lord Peter Wimsey) as Bertie and Dennis Price as Jeeves appeared in the TV series The World of Wooster. (It is on record that Wodehouse did not care much for any of these adaptations.)

There is also a BBC radio version starring Richard Briers as Bertie and Michael Hordern as Jeeves, possibly the most faithful adaptation of the books, as it preserves Bertie's first-person narration. This series included dramatizations of The Inimitable Jeeves; The Code of the Woosters; Right Ho, Jeeves; Joy in the Morning; Stiff Upper Lip, Jeeves; Jeeves and the Feudal Spirit; and The Mating Season. All but the last have been released on compact disc and MP3.

The Jeeves stories were also the basis and inspiration for an Andrew Lloyd Webber musical, Jeeves, which was released in 1975 and failed so spectacularly both critically and commercially that it's still thought of as Webber's first real flop. However, in 1996 the musical was reworked, rewritten and re-released as By Jeeves, which was far more successful and got generally positive reviews.

Note: The order in which stories were grouped together in collections does not always match with the order of their initial publication. For example, "Jeeves Takes Charge", the third Jeeves and Wooster story, was originally published in a magazine (The Saturday Evening Post) in 1916 but didn't get included in a book until 1925.

Jeeves and Wooster stories with their own TV Tropes pages: