Literature / Joy in the Morning 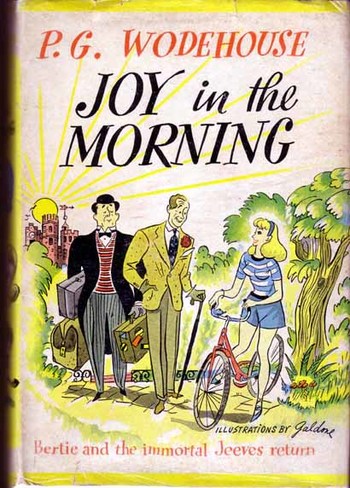 It stars Wodehouse's most famous protagonists, Jeeves and Wooster. Amiable but dimwitted young aristocrat Bertie Wooster goes off to the bookstore to buy his hyperintelligent, hypercompetent valet Jeeves a book by the Dutch philosopher Spinoza

. He is mistakenly given a book called Spindrift which was written by his ex-fiancee, Florence Craye—and at this exact moment Florence enters the bookstore and is impressed to see Bertie with her book. Bertie is terrified of getting caught up again with the intellectual, assertive Florence, but he seems to be safe, as Florence is engaged to one of Bertie's old schoolmates, Stilton Cheesewright. Like Bertie, Stilton comes from money, but unlike Bertie he wants to earn a living so he has taken a job as a policeman in the country village of Steeple Bumleigh.

As it happens, Bertie is going to Steeple Bumleigh. His terrifying Aunt Agatha lives there with her second husband, Percy Craye (Lord Worplesdon), Florence's father. Percy is guardian to Nobby Hopwood, a young lady and childhood friend of Bertie's. Nobby is engaged as well, to Boko Fittleworth, another of Bertie's old school chums. Boko is a writer who will soon be leaving for a Hollywood screenwriting job, and they want to get married right away, but Percy disapproves of Boko and won't give his permission and Nobby is still shy of her 21st birthday. Nobby asks her old friend Bertie for help in bringing Percy around.

If that weren't complicated enough, Percy is looking to merge his shipping business with that of an American magnate, Chichester Clam. Clam has arrived in England and Jeeves has been charged with arranging a clandestine meeting between the two businessmen. Bertie for his part has received an expensive brooch from Aunt Agatha, which he is to deliver to Florence in Steeple Bumleigh as a wedding present. Finally, there is Florence's little brother Edwin, a free-floating agent of chaos.