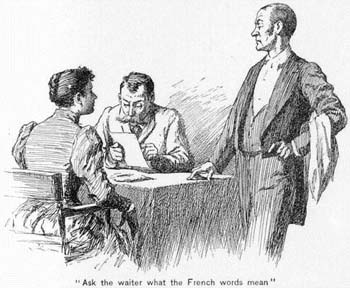 If you can't read the menu, you obviously aren't worthy to eat it.
Image

by A.B. Frost.
Soup dujour, hot hors d’oeuvres
Why we only live to serve
Try the grey stuff, it’s delicious
Don’t believe me, ask the dishes
They can sing, they can dance
After all, Miss, this is France
And a dinner here is never second best
— Lumiere, "Be Our Guest," Beauty and the Beast
Advertisement:

French Cuisine Is Haughty refers to the association in many works of fiction between French cooking and high class gourmet dining, or Snooty Haute Cuisine. For factual information about French cuisine, see Snails and So On and the Wikipedia article on French cuisine.

France in general and Gay Paree in particular is considered by many to be the food capital of the world, and the French culinary tradition is often portrayed as the gold standard of fine dining. Characters visiting Paris will most likely make a point of sampling the fine dining there, and shows about chefs may take place in France.

The French chef is one of the central figures of this trope. Even in many non-French works that take place outside of France, top quality chefs tend to be either are French or experts in French food. The French chef is always a Supreme Chef, and will generally regard himself as a true artist, be something of a drama king, and may be very temperamental if he feels that his genius is not being appreciated. He will probably speak Poirot Speak and describe his creations in loving detail reaching the point of Food Porn. A non-French chef attempting to establish his credentials as a gourmet chef will likely learn French cooking and litter his language with Gratuitous French.

In fiction, a French restaurant is practically synonymous with high class dining. Most French restaurants are going to be upper-class preserve with an exclusive guest list, a dress code, a maître d’, and a supremely snooty waiter that practically tries to force the customers to order what the waiter thinks is proper rather than what the character wants. If characters of lesser standing can even get into such a place to begin with, they will likely end up embarrassing themselves with their inability to afford most of the things on the menu, their inability to understand and pronounce the French on the menu, and by a committing culinary faux pas such as ordering ketchup or having the wrong choice of wine with their meat. If the customer's culinary choices are particularly egregious, the chef will likely come out and fuss at them. If the restaurant does anything wrong, however, the chef may come out and personally apologize.

If the French chef does not work at a high class restaurant, he will be the personal chef for an upperclass household. Indeed, there was once a time where the French chef was considered as indispensable a part of the standard wealthy person's domestic staff as the French Maid.

Overlaps with Everything Sounds Sexier in French, as even an ordinary dish will sound fancier and more cultured when given a French name. Case in point: would you rather eat "crème brûlée" or "burnt cream"?

Sub-Trope to Hollywood Cuisine and Haute Cuisine Is Weird. Compare to French Jerk for a character type common to the French restaurant, and Chez Restaurant for a naming convention commonly used to make things sound high-class. See also Angry Chef.