Series / Rumpole of the Bailey 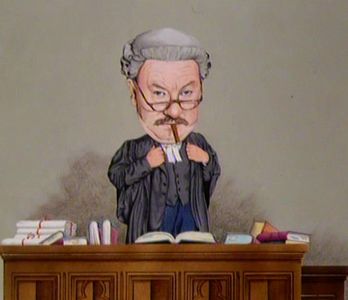 Horace Rumpole, My Lord, appearing for the defendant...
Advertisement:

A Thames Television production for ITV series, intermittently from 1978 to 1992, following an episode of The BBC's Play for Today, focused on the professional and personal life of one Horace Rumpole, barrister at law (played by Leo McKern).

Rumpole's unhealthy personal habits, disdain for societal expectation, and general sharp-tongued iconoclasm earn him few marks among his peers or family. Despite his successes, he is something of an embarrassment to his class-conscious chambers. At home, he has to endure the well-meaning haranguing of his wife, semi-affectionately referred to by Horace as "She Who Must Be Obeyed", a reference to the H. Rider Haggard novel She; one of Rumpole's simple vices is a love of English literature. Although ostensibly mysteries in many cases, the cases he undertakes are very unlike the standard Whodunnit, Agatha Christie murder mystery — in some cases, Rumpole's task is merely to prove how his client didn't commit the crime (more often assault, fraud or theft than out-and-out murder) rather than ferret out the true culprit (although he frequently does so anyway). And, like the Sherlock Holmes cycle, sometimes no crime has really been committed at all.

Yet Rumpole is his own man, and holds dearly to those rules he considers inviolate. Despite the detriment to his career, he never prosecutes. His job is to secure a "not guilty", and this he does with extreme regularity, even if it means antagonizing judges, refusing to make deals, or uncovering more than his client would prefer revealed in court.

The show often strikes a well-balanced, perceptive note between the often ridiculous emphasis to which society demands the appearance of moral behaviour, and how it differs from the common sense, deeply personal, and more authentic morality represented by Rumpole. His mildly amused contempt for the trappings of "polite society" only serve to highlight his profoundly ethical nature.

The character is loosely based on the actual courtroom career of barrister Sir John Mortimer CBE QC, Rumpole's creator and author, who often took on controversial and "lost hope" causes (such as defending the Sex Pistols' use of the word "Bollocks" on the cover of their one and only album — he won by proving the word had been used in common and cherished literature as far back as Chaucer).

John Mortimer adapted many of the show's episodes into book form, and after the show was cancelled continued to write and publish new Rumpole stories, which frequently featured plots Ripped from the Headlines, or as close to it as you can get for a book. Many Rumpole stories have also been adapted for BBC Radio.

Compare and contrast Garrow's Law, which is much like Rumpole, but in Georgian London.

Rumpole of the Bailey contains examples of: