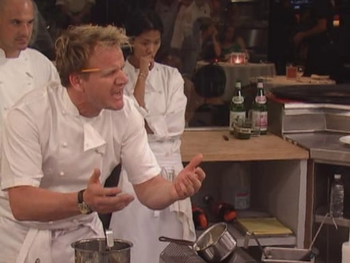 LOOK AT THAT! IT'S RAW! YOU DONKEY, GET OUT!
"I don't want to shout at you. I want to batter you with a hard and jagged kitchen implement! I'm only restrained by the ludicrous liberal pinko laws that we've got in this country! In a sanely ordered, civilised society anyone found making runny mayonnaise would be tortured to death slowly in front of a warm applauding audience! Egg yolk, mustard, rescue it drop by drop!"
— Gareth Blackstock, Chef! (1993)
Advertisement:

A restaurant kitchen can be a very volatile, high-stress environment — the perfect breeding ground for the Angry Chefs. They are demanding, hostile, perfectionist chefs who are always angry and irate, and who have zero tolerance for their staff or customers deviating from their strict standards of what they think culinary perfection and/or managerial efficiency are in any way, shape or form. Typically European, but these characters don’t need to be; also often famous and renowned, with their behavior being tolerated because their food is that good. Might have a similarly angry, food-related Catchphrase like "Get out of my kitchen!" or "No soup for you!"

A Stock Character in medieval literature, where he was usually drunk most of the time as well. In this case, it was usually the result of having to work all the time in the nasty, hot kitchen. However, this stereotype just as easily shows up in a variety of modern works. The Angry Chef can be anyone from characters in Cooking Stories, judges or participants on Cooking Shows, or simply proprietors or employees of restaurants the characters visit for an episode. One variation is for a typically nice character turn out to be an absolute beast in the kitchen.

In real life, one must keep in mind that a restaurant serves food, and improperly handled or prepared food can send people to the emergency room, kill them, or damage the reputation of the restaurant, at times simultaneously, so a good Chef has to have high standards not only for them but also their staff and enforce these standards strictly, which isn't always pleasant since few people love being chewed out. Fiction exaggerates this for humor, though.

Compare Evil Chef, contrast Sweet Baker. May be a Mean Boss if he takes it out on his staff. See also French Cuisine Is Haughty.

Skinner is quite the mean chef at Gusteau's restaurant in Paris.

Skinner is quite the mean chef at Gusteau's restaurant in Paris.