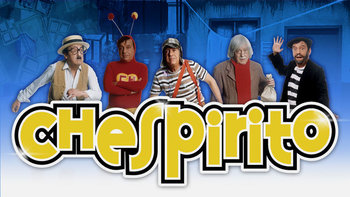 Chespirito is a sketch-comedy series named after Roberto Gómez Bolaños, known as "Chespirito" (a play on "Shakespearecito", or "little Shakespeare") the Mexican comedian who wrote and starred in almost every sketch on the show. It's most famous for the skits El Chavo del ocho, in which Chespirito and others play small children who get into various mischief, and El Chapulín Colorado, a parody of comic-book super-heroes, who exhibits the opposite of all typical superhero traits, save for having good intentions. Both of these spun off into independent sitcoms for several years. Other popular sketches on the show were Dr. Chapatín (a rude, money-grubbing doctor who went a little berserk any time someone mentioned his age), Los Chifladitos (the surreal adventures of two suburban lunatics), and Los Caquitos (sketches about two small-time thieves, who eventually reform and try a series of odd jobs).

Chespirito ran for twenty-plus years, in one form or another, with most of the cast remaining for the entire time. Unfortunately, two cast members — Ramón Valdés and Carlos Villagrán — dropped out after having disagreements with the star. Many fans regard this as a Jump the Shark moment, since they played some of the best-loved characters on the show. Still, the show managed to go on for more than a decade without them, gradually relying more on sketches that didn't feature them.

Although the sitcoms are probably more fondly remembered than the sketch-comedy hour, the show is a major piece of Latin American pop-culture, and is still widely syndicated today.

Gómez Bolaños passed away on November 28, 2014, at age 85, leaving behind a huge legacy that will be remembered for generations to come.

This show as a whole provides examples of:

The skit "Los Chifladitos" ("The Little Crazies") provides examples of:

The skit "Los Caquitos" ("The Little Thieves") provides examples of:

Other skits provide examples of: