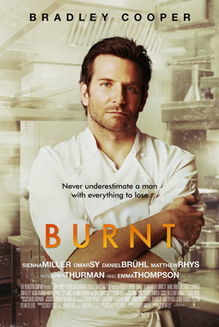 "Jean-Luc, my mentor, the guy who gave me a chance as a chef, said to me it was God who created oysters and apples. And you can't improve recipes like that. But it is our job to try."
— Adam Jones
Advertisement:

Burnt is a 2015 drama film starring Bradley Cooper as a brilliant but temperamental chef trying to return to prominence.