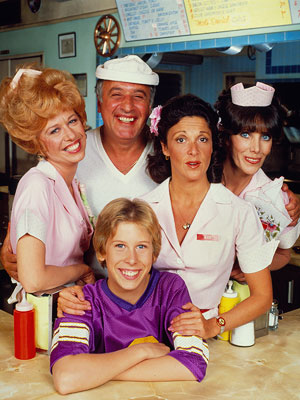 A Work Com on CBS that straddled The '70s and The '80s, set in a diner and starring Linda Lavin as Alice Hyatt. Loosely adapted from Martin Scorsese's 1974 dramedy film Alice Doesn't Live Here Anymore — no, really! — the series ran from 1976 to 1985, a total of 202 episodes in nine seasons.

Alice Hyatt was a widowed mother and aspiring singer whose car broke down in Phoenix, Arizona while she and her son Tommy (Philip McKeon) were en route from New Jersey to California. Her waitressing job at Mel's Diner was meant to be temporary while she got her singing career moving, but it stretched out to nine seasons. During that time, we met penny-pinching hothead Mel Sharples (Vic Tayback), the diner's owner; ditzy Cloudcuckoolander waitress Vera Gorman (Beth Howland); and wise-cracking, slightly over-the-hill, good-time-girl waitress Flo Castleberry (Polly Holliday). In the midst of all the schemes and hilarity that ensued at the diner, it was always Alice who remained level-headed and somehow always came up with a solution.

The series became quite popular, particularly because of Flo, who left for her own spinoff a few years in. In her place came a Suspiciously Similar Substitute, Belle Dupree, who was basically a blond version of the character. Although they (re)cast the actress who had played Flo in the original movie (Diane Ladd), Belle didn't last long, and was replaced by Jolene Hunnicutt (Celia Weston). Jolene had a similar outspoken temperament to her predecessors, but was younger and less obviously promiscuous.

Alice is remembered for making the Catchphrase "Kiss my grits!" (as uttered by Flo) enormously popular for a short while. The show also gave Linda Lavin many occasions to show off her singing skills, and occasionally let her masquerade as other characters to give her a break from playing the ultra-normal, non-threatening Alice.

No relation to the 1990 Woody Allen film Alice, the 2009 Syfy miniseries Alice, or the the song/movie Alice's Restaurant.

Tropes served up at Mel's Diner: